The T&RA is pleased to announce the T&RA Rackets Mixed Doubles will henceforth be known as the Andrina Webb Mixed Doubles, in honour of a wonderful lady who could brighten any room with her smile.

Andrina worked as the T&RA Membership Secretary since January 2014 and knew virtually all of our members, who always delighted in their interactions with her. She was taken from us before her time.

The first Andrina Webb Mixed Doubles Open 2022 was the most successful mixed Rackets tournament yet.

With 18 pairs, made up of 5 World Championship Challengers, 2 British Open champions and several Public Schools champions, the tournament was well-attended across the board.

And with the highest standard of mixed Rackets ever seen before, the 2022 Mixed Open brought brilliance, drama and fun to Queen’s Championship and Bridgeman courts.

The tournament was originally inaugurated with 8 pairs in 2019 when OCs Felix Clarke and India Deakin took home the trophy.

Cancelled in 2020 and 2021 due to Covid, a repeat organisation committee of Oxford Brookes’ Ben Cawston and Deakin was instrumental in making it happen this time around.

And in 2022 the tournament name was officially changed to honour and recognise the sad passing of beloved rackets supporter and 8-year T&RA membership secretary Andrina Webb.

Starting with some fresh-faced groups at 10am, play continued all day until the hotly anticipated final at 6pm, with plenty of drinks for Gus Slatter in between.

The group stages saw some impressive play from current Cheltenonians and OCs, as well as an array of illustrious Queen’s members.

Some ladies, including Cesca Sweet, Tara Lumley, Georgie Willis and India Deakin had even challenged for the World Championship the same weekend.

In the semis, Willis and Giddins went on to beat Georgie Gunn and Jules Manton-Jones 15/3 and 15/7.

And sibling duo John and Tara made it to the final after a tense deciding set to five against Clarke and Candy to win 2-1.

With John serving to win the first game 15/9 for the Lumleys, Oxford won the second before a nail biting set to five saw the latter bring it home.

With brilliant marking from Cheltenham’s Rob Horn and rackets legend Howard Angus, as well as an array of help from everyone on board, the tournament was widely supported at Queen’s and beyond.

And with a large amount of OCs in the draw, a special thanks must go to Cheltenham pro Mark Briers, whose drive and determination to grow the mixed game is why events like this happen.

Whilst the London tournament saw the best standard yet, it is all about letting the ladies (and men) improve and will always remain open to anyone and everyone.

The Andrina Webb Open joins other mixed tournaments the Manchester Mixed and Cheltenham Gold Racket in the Rackets calendar.

Hopefully the May bank holiday Monday saw a day of play that would make Andrina proud, as her legacy will continue to be honoured each year with this cup. 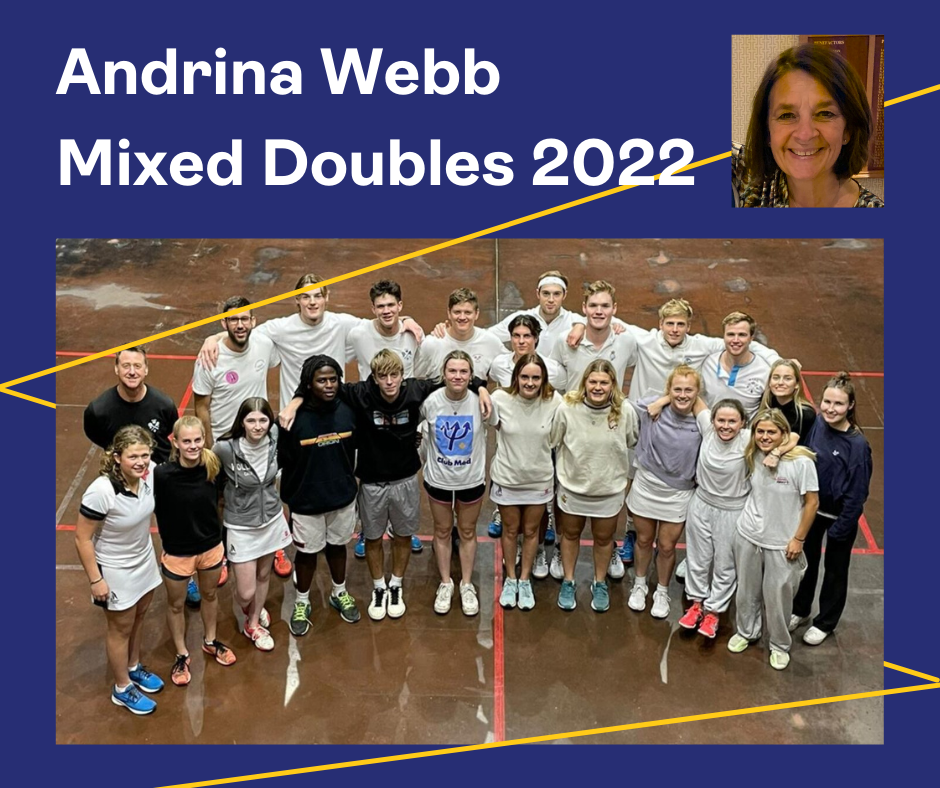