A History of the Royal Game of Tennis

Scholars tell us that hand-ball (jeu de paume in French) was played by the Greeks and the Romans, and by even earlier civilisations. There are references in the classics to a game that was played in a stone court, as is fives in our country today. Pilare, in Latin, was to play ball and pila was the word for a ball. Hence, palla in Latin and pelote in French.

The Roman legionaries, moving into Gaul, perhaps brought the custom of hand-ball with them. What is certain is that the game came to be played against the walls of town buildings and keeps of castles, and in and outside monasteries and ecclesiastical buildings. At a time when England held vast territories in France, the game was not slow to spread to our island. Indeed, the origin of the word tennis is thought to stem from the Anglo-Norman imperative tenetz! The cry of warning given by the server, “Take this! Play!”

Though tennis is traditionally styled the Game of Kings early records show that it was the ecclesiastical high-ups who first put their stamp of approval on the game. Prelates, Abbots and minor clergy played it with almost religious fervour. In certain provincial towns in France, the bishop of the diocese received a tithe of tennis balls on Easter Day. With choristers and schoolboys, the sport became a veritable craze and was frequently cited as a cause of truancy. The monastic type of building clearly lent itself to wall games, and it is thought that the eteufs or tennis balls were made from the discarded robes of monks.

During the Middle Ages, players began to protect their hands with a leather glove. Later this glove was to acquire gut strings in the style of a guitar. As this somewhat imperfect instrument evolved, a short six-inch handle came to be added to it. Early drawings depict this battoir and indicate that it was covered with vellum, a practice which led to the stealing of manuscripts by unscrupulous persons. A scholarly performer was once aghast to observe that his hired battoir was covered with still faintly decipherable fragments of a lost decade of Livy.

Throughout the history of the game great stress is laid on its therapeutic value. The Greek doctor Galen recommended it as the most salutary of all exercise. The first rules of tennis ever published- Hulpeau’s Ordonnance du Royal et honourable Jeu de la Paulme, Paris, 1592, began ”You gentlemen who desire to strive with another at tennis must play for the recreation of the body and the delectation of the mind, and must not indulge in swearing or in blasphemy against the name of God”. Pepys, in a diary entry of April 4th, 1668, writes, “…how my Lord of Pembroke says he hath heard the Quaker at the tennis-court swear to himself when he loses”.

It is hardly surprising that generations of French and English kings were taught the game in their youth. Charles II of France was painted with a racquet in his hand at the age of two.

The commoner was only too anxious to try his hand at the Game of Kings, and repressive measures, for the most part ineffective, were enacted in both France and England in order to restrict the game to nobility only. Henri II was the star of all the French kings, though the much loved Henri IV was the greater zealot. In England, James I’s son, Henry who sadly died at eighteen, was reputed to have been a brilliant performer. The English royalty played in courts at Windsor, Whitehall, Westminster, Wycombe and Woodstock. It is well known that in Shakespeare’s Henry V, the hero, having been insulted by the Dauphin with a gift of tennis-balls, threatens to “Strike his father’s crown into the hazard” warning him that “he hath made a match with such a wrangler that all the courts of France will be disturbed with chases”. Henry VII and Henry VIII were both keen supporters and excellent performers, the latter being responsible for the building of the Royal Court at Hampton Court Palace. Charles I and Charles II were devotees of the game all their lives and both used to rise at five or six in the morning to play. Pepys, after a visit to the new tennis court at Whitehall, wrote of Charles II, “…but to see how the king’s play was extolled, without any cause was a loathsome sight, though sometimes he did play very well and deserved to be commended, but such open flattery is beastly”. It is known that his brother, James II, was also a fine player – surely one of his few redeeming feature! – and there is also a well-known portrait of him playing as a boy with a short-handled racket before a crowd of ladies and gentlemen in the dedans. His son-in-law William III, played from time to time, fortified, we are told, with stoups of Spanish wine. The untimely death of Frederick Prince of Wales in 1751 was due, according to that inveterate gossip, Horace Walpole, to a “blow upon the stomach from a tennis-ball” – one of a number of royal casualties resulting from tennis.

It is an incredible but documented fact that between 1550 and 1700 there were no fewer than two hundred and fifty courts of various shapes and sizes in Paris alone.

Small wonder that Shakespeare refers to” all the courts of France”, since many of her provincial towns could boast half a dozen or more of them. It was not until the fashion-ridden reign of Louis XIV that courts began to fall into disuse, because he, and therefore his courtiers, preferred to use the game as a medium for the laying of extravagant bets rather than playing themselves. This did at least encourage exhibition matches between the leading professionals, the maitres-paumiers of the day.

As the kings and many nobles employed their own professionals, the status of these men was considerable. In France,they had their own guild with appropriate escutcheon, shared admittedly in early days with the makers of bootand clothes-brushes, and they were protected by royal patent from unauthorised vendors of tennis balls and rackets. Statutes exist which set out minutely the duties and obligations of the maitre-paumier, as it was considered important to prevent the tennis-courts from harbouring undesirable elements of society. The paumier-apprentice had to learn the difficult art of making racquets and balls, special tools and equipment being required for the job. Before being admitted to his guild, the apprentice was called upon to give proof of his skills, not only as an artisan, but also as a player.

It would seem that the paumier had to employ a considerable staff of assistants known as marqueurs. They called the chases, marked up the games and sets, cleaned the court and rubbed the players down after their game.

With grateful thanks to Sir Richard Hamilton 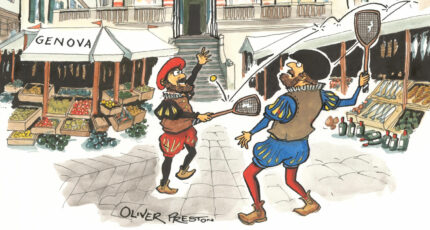 Tennis in the British Isles 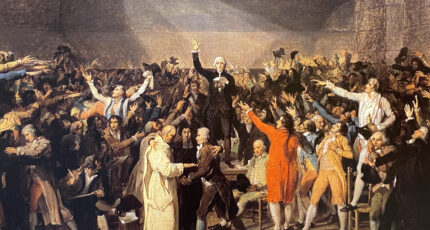