The T&RA British Open 2021 saw the top players back in action, competing for world challenge points for the first time since the pandemic squeezed the life out of international Real Tennis. It was also good to see five overseas’ players, two from the US and three from France, making the time and effort to travel to the Queen’s Club.

Young rising talent Will Flynn (Seacourt) made his way through qualifying to take his place in the main draw but ran into the steady Tom Durack (Petworth) in the first round. The second round saw the top seeds enter the fray and dispatching their valiant opponents, except for Josh Smith (Holyport) who fell to the inspired amateur Jamie Giddins in a five-set epic. Sadly, it was Giddins’ last match as injury forced him out of the quarter-finals. At this stage the top two seeds, Rob Fahey (Oratory) and Ben Taylor-Matthew (Leamington) won their respective matches against leading amateur Matthieu Sarlangue and Darren Long (Manchester) respectively. But the final match of the day saw Bryn Sayers (Queen’s) steer his way past Nick Howell (Bordeaux).

The two semi-finals were intriguing, with World Champion Fahey lined up against rising talent John Lumley (Philadelphia) and then doubles partners, Taylor-Matthews and Sayers, looking at each other across the net. The first semi saw Lumley return everything Fahey could fire at him, with exquisite shots overcoming the power of Fahey. The Champion had his moments in the first and third sets, but it was Lumley who reached his maiden British Open Singles final, winning 6/4 6/0 6/4. The second match was a thriller as these two great players knew each other’s games so well and the lines were drawn for a lengthy encounter. After two sets, it was one-set all, although Taylor-Matthews was close in the second. The intensity never waned as the number two seed, Taylor-Matthews, scored the key points to wear his opponent down and eventually reach his first British Open Singles final, winning 6/2 5/6 6/3 6/5.

The Monday evening was filled with anticipation and, after a Pol Roger reception for the spectators, the match was underway. The first set was finely balance with both players returning well and playing the big points fairly equally. But it was Taylor-Matthews who found his length at the end of the set to establish the early pace. In an equally exciting second set, Lumley slowly built his way back in the game to level – one set-all – but could easily have been two-love to either player at this point. Lumley now had the momentum, which he carried into the third set, with Taylor-Matthews seeing everything coming back; a lead Lumley wasn’t about to relinquish as he took the next two sets to claim the Open Championship, 4/6 6/4 6/2 6/0.

David Watson, the retiring T&RA Chairman, was on hand to commemorate the volunteer of the Year, T&RA Director of Junior Tennis, Paul Weaver, who managed to hold numerous events, including the Junior British Open, during the infrequent breaks in the lockdown. Paul has run this event for the last 21 years. Next was a lifetime achievement award to Chris Ronaldson (Radley/Bristol) who has spend an astonishing 50 years in service to the game. During this time, he has revived courts and clubs and was instrumental behind the Radley Court built to 2008. He was also the Open Champion between 1980 and 1985.

Finally, David Watson presented the famous Open trophy to John Lumley, another wonderful achievement in his reasonably short career to date; his name on this trophy for the first time. John’s proud family were all in support including his mother, Penny a former ladies Tennis world champion, and sister Tara, the current world doubles champion, in both Tennis and Rackets. 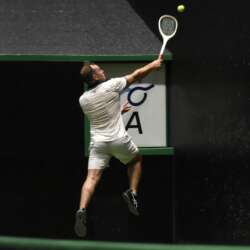 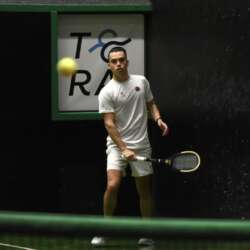 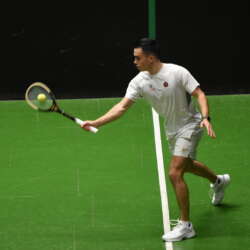 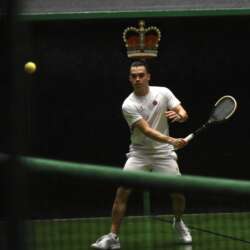 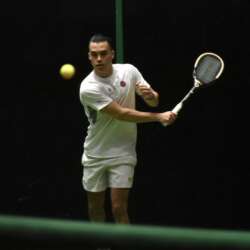 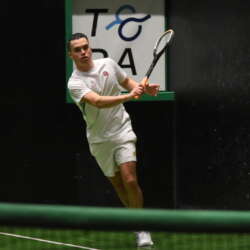 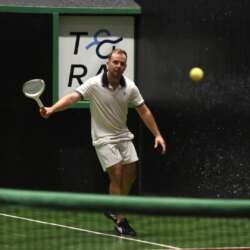 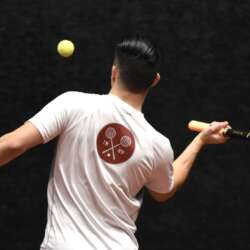 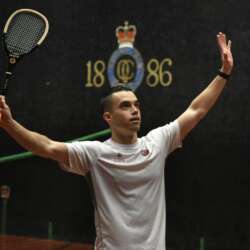 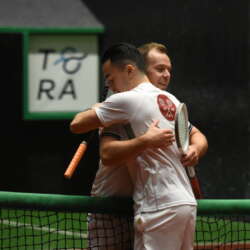 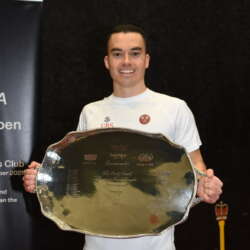 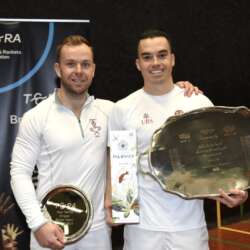 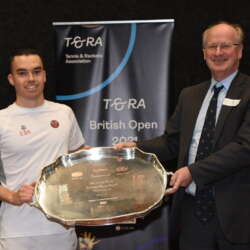 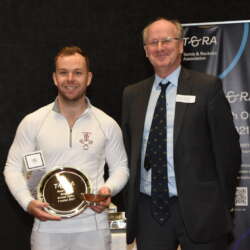 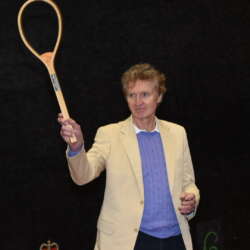 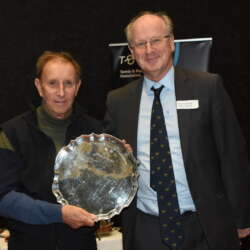 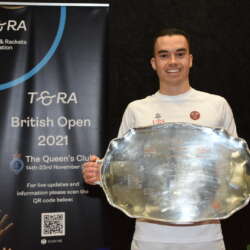 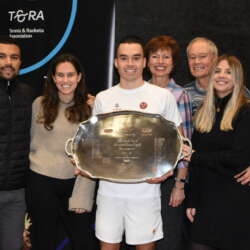 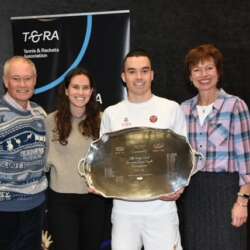