This was one of the most exciting Varsity Rackets Matches for many years.

This match was very much dominated by serve. Arthur Adams (C), serving a left-handed back-hand serve from both boxes (very unusual, if not necessarily unique!) kept Dan Whiley (O) under constant pressure with the excellent length on his serves, amassing 33 of his 45 points on service winners to give Cambridge the opening rubber in three straight games.

An excellent match with many marvellous rallies containing some fine takes of serve, impressive retrieving and decisive winners. All three games followed a similar pattern, with Alex Moen (C) building up a substantial lead only for Ben Yorston to claw his way back into contention before Alex got back in hand and took the points necessary to win each of the three close games. So Cambridge lead at this stage by 2 rubbers to nil.

As in the 4th string match, this contest was again largely determined by serving, but in this rubber it was Oxford in the driving seat, Isaac Wighton (O) totalling 28 points on service compared to 10 by Louis Desalles (C). So now it is Cambridge 2 rubbers, Oxford 1 rubber.

Louis Manson (O) started the stronger, taking the first two games 15/8, 15/11 and looking the more consistent player. But then Patrick Smart (C) began to serve well, taking the next two games 15/4, 15/9 to set up a deciding game in which Cambridge maintained the momentum to take the fifth game 15/3, including 9 points on serve. This top string win gave Cambridge a 3 rubbers to 1 lead after the singles matches.

Cambridge took a substantial lead in the opening game, reaching 13-4 before Oxford staged a comeback. At 12-13, with both Oxford players still to serve, it was hard to tell who would take this crucial first game, but when Cambridge managed to get both opponents out of hand, the 'light blues' were able to clinch the two points needed to win the game 15/12. From there on in Cambridge were on top, serving well and winning the rubber 15/12, 15/4, 15/5, thereby giving Cambridge an unassailable 4 rubbers to 1 lead in the combined match, i.e. for the 4 singles and 2 doubles contest.

Once again, as in the 1st string singles, it was Oxford who began the better to take the opening two games 15/9, 15/8. And again Cambridge then came back courageously to win the 3rd and 4th games 15/9, 15/6. Surely Oxford were not going to let a two games to nil lead slip away a second time in the day in the deciding 5th? The Oxford Captain, Louis Manson, in an impressive run from 0-2 to 10-2, in one hand, seemed to have all but clinched things, and Oxford continued on, in subsequent hands, to reach 14-4, match point. But then Cambridge got both opponents out of hand and caught up all the way to 12-14 in a single hand. But that was as far as they could go! Oxford kept cool, got both Cambridge players out of hand and took the rubber on their third match point.

Cambridge win overall contest for combined 1st and 2nd Pairs by 4 rubbers to 2.

This was one of the most exciting Varsity Rackets Matches for many years, and in the evening all 8 players were delighted to be presented with prizes, including bottles of Pol Roger Champagne for the victorious Cambridge team, and receive the huge Pol Roger Bowl, at the ever-popular Pol Roger Reception in the Queen's Museum, hosted, as always, by the indefatigable James Simpson, MW, the M.D. of Pol Roger Ltd, who have been the stalwart Sponsors of the Varsity Rackets Match for at least a quarter of a century (as well as a great many other Oxbridge contests, including Winetasting and Real Tennis!). 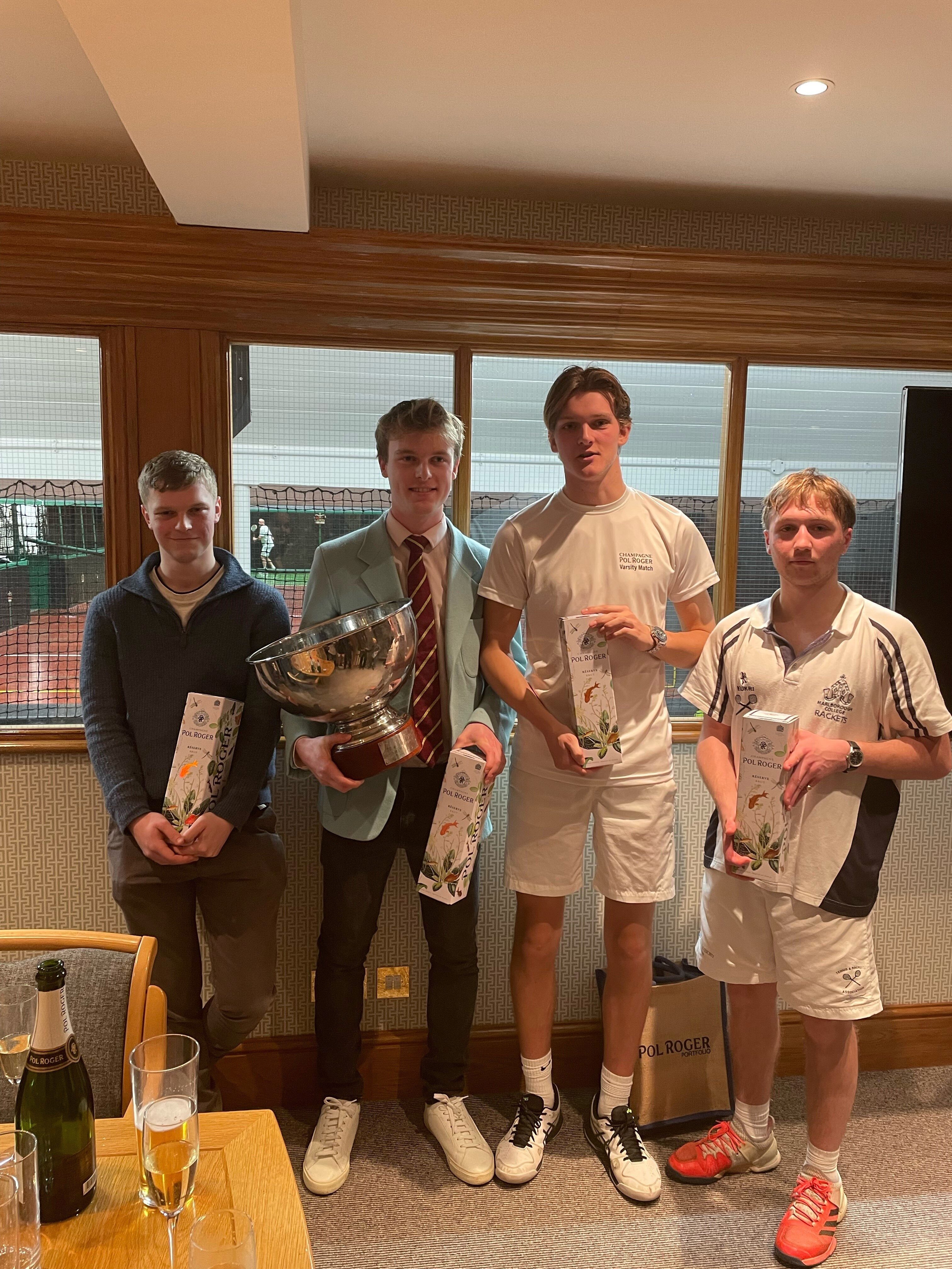