On 14 September 1971, Chris Ronaldson was interviewed for the job of Assistant Professional at the Oxford University Tennis Club and started work there less than two hours later. Now the world’s longest-serving professional, he celebrates fifty years in the game.

He published Marking Fifty Years in May this year, as a review of many of the changes that have affected the world of Real Tennis since he first entered it. He has written about many aspects of the game (such as equipment, rules, tournaments and governing associations), about some of the people who have played it during his long career and about some of the changes in society and culture that have had direct and indirect impact upon tennis.

As Maggie Henderson-Tew wrote in the afterword to that book:

‘There is no one, absolutely no one, who has made a more profound contribution to the game in the past fifty years. It certainly was in a sorry state fifty years ago when he stumbled into it, although it was already in much more robust health when I came across it in the following decade.

The fact that the game has survived and is in good heart wherever it is played, is in large part due to Chris’s outstanding work and extraordinary dedication. Is there anyone who has EVER made a greater contribution, on and off the court, to the game during its long, long history, let alone in the past half century? I think not. His determination to do everything possible to ensure the continuation and good health of Real Tennis has been unwavering and continues undimmed. He has picked his fights and has stuck, stubbornly, to what he believes is in the best interests of the game, sometimes at the expense of his own popularity. Two of his most notable areas of success have been in the attritional battles he fought to enhance the status and treatment of professionals, their remuneration and representation; and secondly and of greater importance for the amateurs who make up the majority of players, Chris’s continuous efforts to expand the player-profile beyond its traditional boundaries, by encouraging anyone interested in learning the game, including women and juniors. In these areas and others, Chris appears to be on the right side of history.

That length of career makes CJR the world’s longest-serving professional currently plying the trade. But that, though impressive, is simply a quantitative measurement, like the 70,000 balls he estimates that has sewn, the close to a quarter of a million of hours that I calculate that he has worked or the more than 20,000 lessons he has delivered. By the way, as most people work about 80,000 hours in a career of 44 years, he has quite possibly worked the equivalent of at least two normal people already, which, looking at it another way, means he has been working for more like 100 years than 50.

But leaving the numbers aside, the more remarkable measure is that of the quality of CJR’s contributions… He has excelled in every facet of the game. He was World Champion for six years, during which period he dominated the game and built a fearsome reputation for his training regimen off court, his steely temperament on it and his deep thinking about tactics and technique. He was the first man to hold the Grand Slam of titles, winning the Australian, British, French and US Opens in the same year. In all, he won 51 level singles tournaments, retiring from competitive play in 1993.

As a professional, Chris broke the mould, being much taller, as well as much cleverer than the norm. He changed the status of UK pros in a number of ways and has been responsible for developing the role from one of being the servant at a club to being its manager; if you like, from being the Bell Boy, surviving on tips and dispensing (often insincere) servility, to becoming the Maitre d’. Not only was CJR the first university-educated professional in the UK but he was the first one (perhaps ever, to that date) to be over six feet tall. This was a height that, it was said, was far too great ever to become a top player.

Chris has built a reputation as a player, coach, and club professional, for being THE BEST. It has been achieved through considerable self-sacrifice, the application of an intense and relentless work ethic and a refusal to accept anything less than full commitment from himself. His record as a club professional is extraordinary. Apart from his first two years in tennis, spent at the Oxford University club, CJR has either started clubs from scratch or breathed life back into moribund ones. He has never failed - and how many of us can say that? Each of the clubs where he has been Head Professional has, within the shortest possible time, had a fully utilised court, a happy and expanding membership, buoyant finances, and the hum of purposeful and positive activity.

Notwithstanding the hours required to achieve success of this nature (typically a working day that start before 8am and ends after 11pm and often seven days a week), Chris has managed to cram in impressive additional achievements. It is a long list, so take a deep breath and read on. Amongst these other things he has done are: inventing the handicapping system, which is still in use; devising the player-ranking system, also in use today; changing the format and management of the World Championship Challenge into that which now prevails; writing the first comprehensive coaching manual for a century, ‘A Cut Above the Rest’, that became the best-selling book on the subject of tennis; setting up, with his father, Ronaldson Publications, which became the most-prolific publishing house on the subject of tennis; putting together a small consortium of which he was the largest shareholder that bought a court (Holyport, in 1985) when it looked as if it would be lost to the game; rescuing the bankrupt Bordeaux club in 1982, for no financial reward; working for a year, on top of his job in tennis, as a City trader, in an office environment he loathed and with people whose ethics he generally despised, to enable him to pay for the education of his sons; taking part-time degrees in his beloved subject of history, excelling, by achieving a First followed by a Master’s degree, and then teaching twentieth century history to adults in evening classes; and serving on countless committees (for his clubs, the T&RA Tennis, Rules, Equipment and Tournament bodies and the IRTPA) for year, after year, after year.

These are some of Chris’s direct contributions to the game, but it is through the indirect ones that his tremendous influence has spread throughout the tennis world and through generations of players. He has trained many assistants, some of whom have gone on to be great players, like Lachie Deuchar, Wayne Davies, Nick Wood, and, although separated by 36 years, the father and son duo of Colin and John Lumley, and he has been a mentor of Camden Riviere, long before and after he worked with Chris at Hampton Court for a year in 2004/5. CJR stands at the head of the Ronaldsons who live and work in tennis and, through his own example and, indirectly, through those he has trained or worked with, CJR has instilled a deep love of the game in hundreds and hundreds of people, be they professionals or amateurs, club members or new arrivals, elite players or those who just dream of being able to play a decent game. His instruction, demonstrations, suggestions, comments and hints have helped countless players of all standards to develop their skills. He has tirelessly given of his time, energy and intelligence to the various representative bodies that make up the game and has done so for neither financial gain nor glory. Yet, somehow, he managed and still manages, on top of everything else, to dispense help, guidance, advice and support to anyone who approaches him from anywhere in the tennis world.’

Thank you, CJR, and congratulations on achieving this significant milestone. Your contribution to the game of Real Tennis is unsurpassed.

Cost: £15 for the standard edition and £75 for the limited edition. 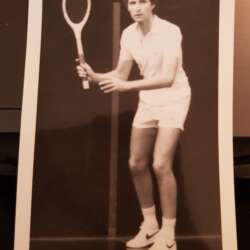 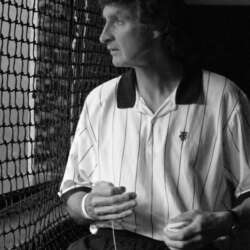 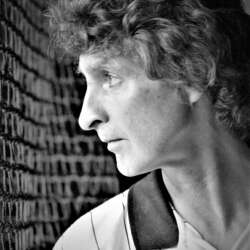 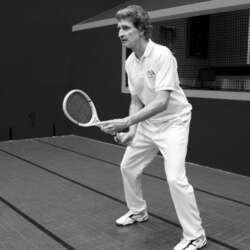 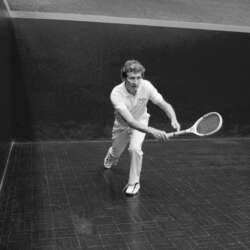