The Garland Cup was first contested in 1922 to commemorate the founder of the court Charles Tuller Garland. Usually played in January, it was transferred to unusually hot July days because we were desperate to get going again. Once we had located and cleaned the cup we were ready to go. Qualifying was extended a little to facilitate social distancing and members were encouraged not to come to court unless playing. It wasn’t quite normal, but normal enough. 8 boxes of 4 players round robined and the top 2 from each group qualified for the last 16 and Sunday’s finals day. Previous success didn’t prove much of a guide. Only one former winner qualified for finals day (Andrew Hamilton) and he lost in the last 16.

The warm weather made rests unusually long, at least until exhaustion set in. Jonny Miller found a way around this by serving his railroad into the nick endlessly. Meanwhile getting a chase against the mercurial Harry Walsh was impossible unless aiming for the galleries. Both qualified. Also looking strong at this stage were Tony Branfield, Mark Leefe, Will Todd and Bruce Paxton all of whom won 3 out of 3. Entertainment was provided by fellow qualifiers Steve ‘Leaping Salmon’ Walsh, Mark ‘Basher’ Maclure, Pablo ‘Howzat’ Smeeth and David ‘Hong Kong Phooey’ Aldwinckle, the latter hitting some of the most (and alas least) sensational shots of the tournament. We arrived at finals day with a fine mix of handicaps from 31 to 70. Some excellent players went out including a few returning to competition after an absence of some time, including new vice chair Simon Hobson and Miles Buckinghamshire.

In the last 16 Maclure was driven to distraction by ‘1 serve banned the tambour’; as he served consecutive ‘double faults’ straight into the winning gallery it looked like it might be the quickest defeat in history. Though he recovered to lead 3/2, Peter Wilson remained steady and took the win. Jeremy Hawkins (illness) Alan Moug (tennis elbow) and Bruce Paxton (hamstring) were sadly eliminated by bad luck. Meanwhile Harry and Steve Walsh each won to set up a father and son quarter final.

Quarter Finals: It looked like it might be Jonny Miller’s year, but he was somehow squeezed out 5/4 by Tony Branfield. Jonny’s handicap will surely drop below 40 very soon. Mark Leefe’s concentration against the ‘1 serve banned tambour’ nonsense saw him edge out a determined Peter Wilson. With an even larger handicap difference to cope with, Will Todd beat John Strachan. Walsh Junior looked more relaxed than Walsh Senior, the latter taking one hell of a beating.

Semi-Finals: The hitherto impressive Mark Leefe fell victim to the Branfield steamroller and Harry Walsh finally playing someone as quick as he is, lost to the more consistent Todd. As a marker I have to say thank you to Harry for being always entertaining.

Final: When Will Todd won the 6th game to make the score 3-3 it really looked as if he would go on to win. However, playing a race to 5 in the final (due to the heat) one never knows. Branfield suddenly found a hidden serve of splendid spin and length and Todd made more unforced errors in two games than he had in the two previous days. Nonetheless congratulations to him on a splendid tournament in which he rivalled Harry Walsh for speed and anyone else for skill. But the winner was a determined Tony Branfield. As Owen Pettiford did in 2010/11, Branfield did in 2020/21 – losing the final one year, only to win the next. He picked up the trophy (cleaned along with all the others by Simon Hobson – thanks!) and a lovely bottle of Pol Roger supplied by the T&RA, for which further thanks.

Thanks are offered by the Pros to all the players who took part for coping so well with the heat and not letting it affect their temperament. As a marker, a nod of thanks at the end and acceptance of what might sometimes look different on court is much appreciated. Thanks also to George Kruszynskyj who provided a splendid lunch for those playing on finals day.

How we have missed such days! 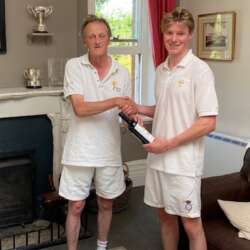 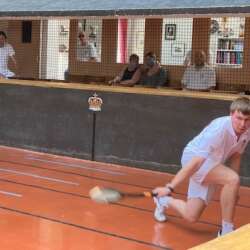 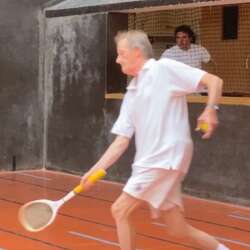 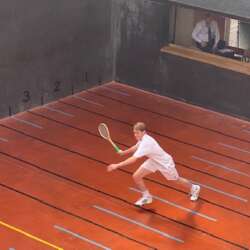 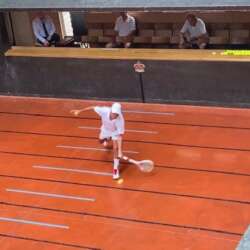 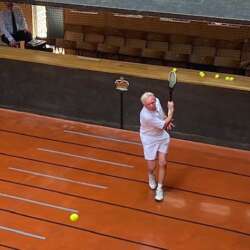 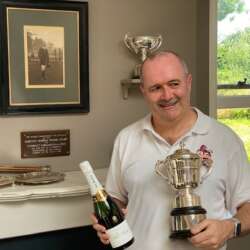 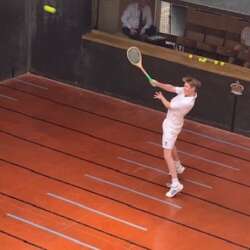 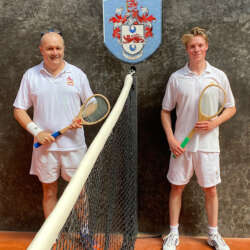 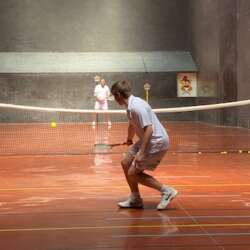