Unfortunately due to technical difficulties we were unable to live stream. Full report below.

The Noel Bruce attracted 54 pairs this year, the second highest ever entry, and ran over three weeks. Perhaps the lack of Rackets over the previous 18 months contributed, but huge thanks to Ed Hyde for his inspiration and organisation. In addition, Howard Angus marked the early stages virtually single handed, putting around 2,000 miles on his mileage in the process as he travelled in from the far reaches of Bucks. Some good early performances with the qualifying played in great spirit. Also good to see so many young players still representing their schools and hope to see them all in future competition this season.

The main draw started in earnest in early September with some good contests in the first round which saw Winchester II take a game off Haileybury; and Malvern II working hard to overcome an inspired Eton II. The two top seeds, Winchester and Cheltenham, breezed through their quarter-finals. Haileybury started slowly against Westgate but eventually won 3-1, and Eton overcame Malvern by the same score in a close match.

The first semi-final saw a good battle between Winchester (Mike Bailey and Christian Portz) and Eton (Guy Smith-Bingham and Rory Giddins), with some determined play by the Eton pair, before Winchester won through 4-1. GSB played inspirational Rackets at times with his younger partner showing great maturity to make a great match. The second semi-final saw a close encounter between Cheltenham (Richard Owen and Nick James) and Haileybury (Mark Farmiloe and Tom Billings), with each game closely fought and the match swinging one way then the other. An early lead by Cheltenham was overturned before the match was level at 2 games all, including an epic 18-17 fourth to Cheltenham, but it was then that Haileybury dug deep and powered through the last two games to take the match 4-2.

The final saw Winchester, defending (2019) winners, against Haileybury, 2017 winners. An exciting game played in front of the Queen’s Club David Norman Gallery. Winchester started well and edged a hard hitting first game, before Haileybury levelled taking the closely fought second, 17-15. The third game also reached 14-all, but this time Winchester had the answers to take a 2-1 lead. But now the game changed as Haileybury found their length on service, combined with raw power, taking the next game to level the match and then again to extend a 3-2 lead. Winchester couldn’t respond to the ever-increasing ferocity of the Haileybury service, and the match was over, 4-2 to the third seeds. Thanks to marker, Ben Bomford, and referee, Paddy Sutton, who officiated the first final since lockdown, albeit in great spirit by both pairs. T&RA Rackets Committee Chairman, Rory Sutton, thanked the players and the gallery and Howard Angus, with a foot in both camps, presented the cup to the victorious Haileybury.

The next major event will be the World Challenge Eliminator Matches on 5th and 9th October between Open Champions, Tom Billings and Richard Owen, who will play Mike Bailey and Nick James. All four players went deep into the Noel Bruce and all competed until the semi-finals and beyond. 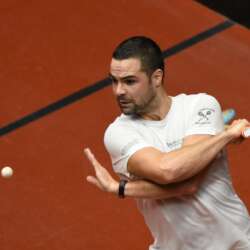 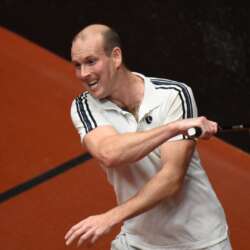 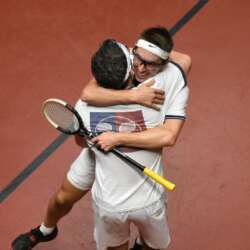 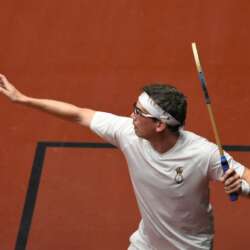 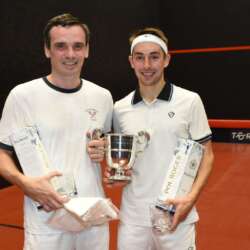 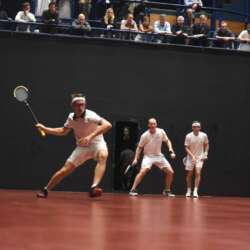 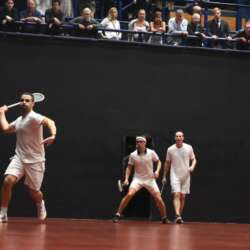 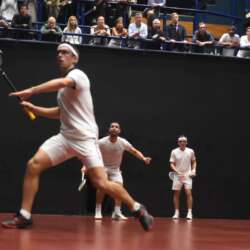 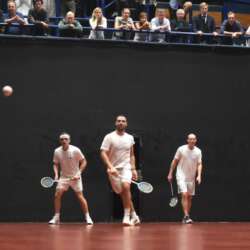