After no competition in 2020 and 2021, due to the covid disruptions, Wellington were excited to host the first over 70’s (age) Amateur Singles and Doubles Championships for three years, and it was a terrific weekend of tennis!

A great entry of 12 singles players and 8 doubles pairs, with ten different clubs represented from the UK and also two players flying in from Piladelphia!

Play started on Friday afternoon with the first doubles round robin which saw the pairings of Paul Weaver & John Ward and Richard Moore & Jamie Bebb both progress to the semi-finals. The final match of the group was between these two pairs to decide who finished top of the group to play the runners up of group 2, and it was a thriller. It looked like Paul & John had it wrapped up at 5/4 with 2 match points, but Richard and Jamie dug deep to defend these and at 5 all Richard & Jamie had 2 match points of their own. Paul & John then matched their opponents in saving these and inevitably it came down to a 40all point which Paul & John took to win the group.

Saturday kicked off with the singles competition. Michael Seymour started the day with a faultless display to defeat 2018 champion Dick Tanfield who had only flown in from the US the day before to set up a match with the top seed Paul Weaver. Richard Moore and Simon De Halpert were then too strong for their opponents Andrew Brown and John Burnett, respectively. Then Richard White and David Brazier had great match which Richard closed out to win 8/5 to complete the quarter final line up.

The holder John Ward who first won this event in 2011 was up against Richard Moore for the spot to play first seed Paul Weaver. It was a great battle and it was John who was able to find his range with his classic cut shots into the corners that forced errors from Richard and John progressed ,winning 8/5. Alan Oliver was then up against his doubles partner Simon De Halpert and it was Alan who came out on top 8/0 in his first appearance in the competition. Another debutant Philip Shaw-Hamilton was up against Richard White, Philip quickly got his aggressive lefty railroad working and won the match to set up a semi against Alan Oliver on Sunday.

We finished Saturday with group 2 of the doubles. Philip S-H then continued his good form, and joined with Nigel Draffan they won all 3 of their matches to move safely into the semi finals. Alan Oliver & Simon De H, still friends after their singles, also progressed by winning their final group match against David Brazier & Michael Seymour which was the match to decide second place in the group.

Finals day was a packed day of tennis. Dick Tanfield was the first winner of the day defeating John Burnett in the Singles Plate decider. The main draw semi finals were next up and it was Paul Weaver taking on John Ward first up. John was again finding the corners with ease and the match went game for game, up until 4 games all, but Paul was quick enough to cut off the shots and send them back with interest and took the match 8/4. The second semi-final was the match of the round between Philip Shaw-Hamilton and Alan Oliver. Both continued to play well following their QF matches but it was Philip who managed to build up a lead and at 7/4 he set up 2 match points, but in true Alan Oliver style Alan battles for every point and beat 2 short chases to save them. The battle continued and Alan won that game and the next to ramp up the pressure, at 7/6 it was another tight game but this time Philip closed out the match to progress to the final. So, we were guaranteed a new champion and Paul & Philip went head to head. Philip started off on the front foot and didn’t let up with his super tight railroad still working well. Paul rallied well and tried to break through, but Philip kept his foot on the gas and took the title with an 8/3 win.

While all credit should go to Philip for playing so well through the tournament, it should be noted that Paul had a heart attack only a few months ago. His footwork is still superb and it is a miracle that he was able to play so well.

It was then onto the doubles… Paul Weaver & John Ward were too strong in their semi-final against Alan Oliver & Simon De Halpert and took their place in the final against the winners of Philip Shaw-Hamilton & Nigel Draffan vs Richard Moore & Jamie Bebb. This was a highly entertaining match with some impressive forces to the dedans from both sides, but it was Philip & Nigel who managed to hit it a few more times to win through to the final.

We then played the Handicap Doubles Plate and it was John Burnett’s second final of the day paired with Richard White and they managed to edge out Andrew Rogers & John Paish to take the win.

The weekend was drawn to a close with the doubles final between the 2 seeded pairs it was great match with both pairs giving it their all but Paul & John couldn’t break through the defence of their opponents and it was Philip & Nigel who were too strong in the end and took the trophy winning 8/3. A great weekend, well played everyone! 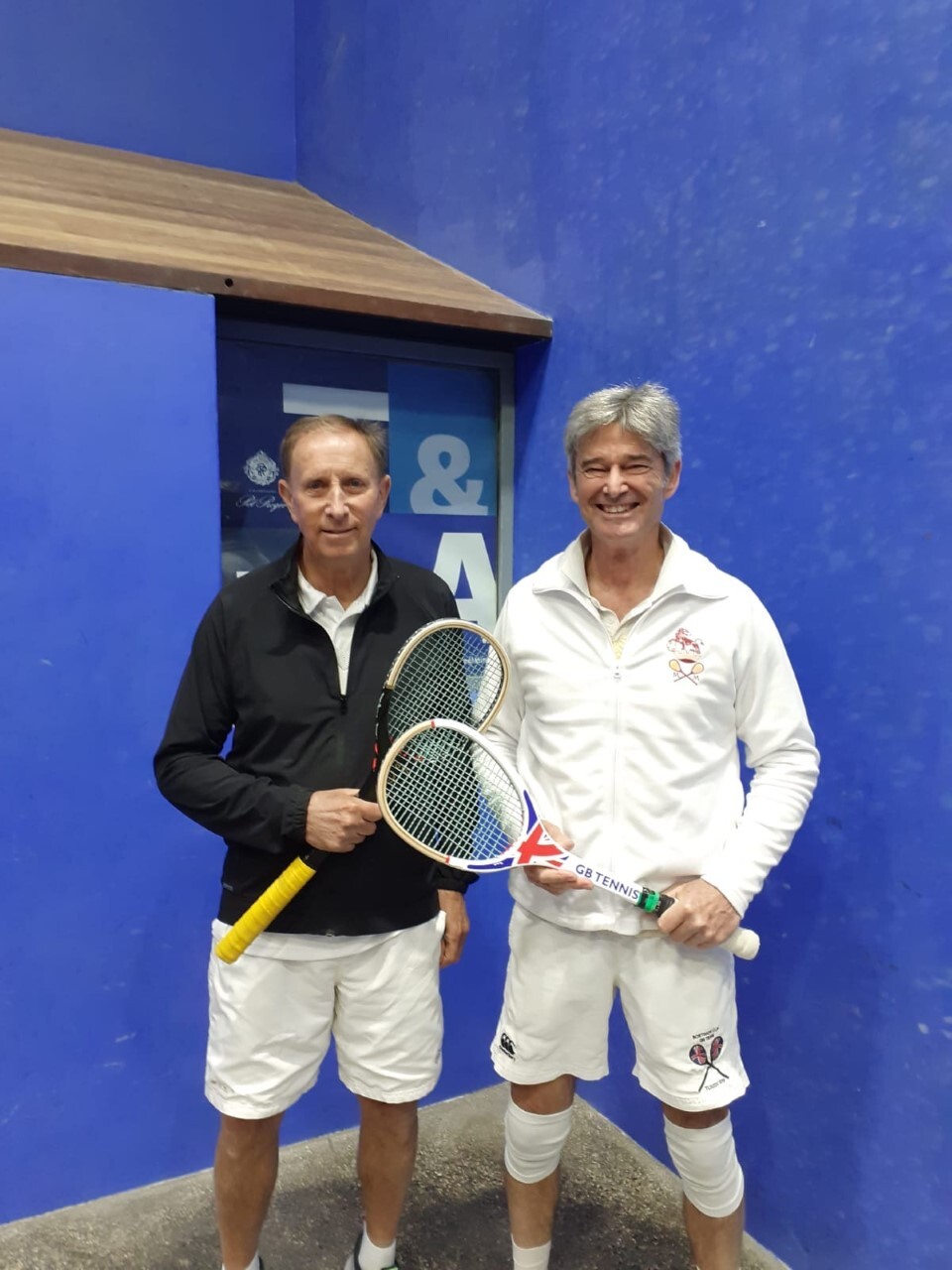 Over 70 Amateur Singles and Doubles Championships 2022