The Hyde Tennis Club, Bridport, Dorset, were delighted to host the Category B tournament this year.

We had some great veterans of the game, Nigel Pendrigh and Mike Henman, as well as a number of former Cat B winners, such as Chris Aley, James Ryan and Benedict Yorsten. But most exciting of all was the number of young players who attended this year: Vaughan Hamilton, Will Flynn, James Medlow, Bertie Vallat and Henry Henman.

On Saturday we held the group stages. All the groups fell as they should according to handicap with the exception of group C in which Henry Henman who played 5 points better than his handicap, managed to get through to the Semi-Final of the 10-14 cup. There was some cracking tennis and the dedans full of supporters were amazed by the talent of the field.

On Sunday, The first Semi-Final for the 15-19 tournament was Chris Aley v Vaughan Hamilton. Vaughan hit 5 nick railroads in the first 3 games and set the tone for the match. Chris was playing some really solid tennis but when Vaughan wasn’t hitting targets, he was retrieving well and fully deserved the win.

Next up James Medlow played Nigel Pendrigh. Nigel, having not played for some time, and recovering from a couple of injuries, was getting better and better as the tournament progressed. James, however, showed how important court time is. He rarely let a ball get past him, and took his opportunities to secure a convincing result.

It was hard to believe that we weren’t watching single figure players in the 10-14 semi-finals. Will Flynn hit some demolishing forces, and his cut volley return was irretrievable. But Bertie Vallat was relentless… anything that wasn’t perfect came back with interest, and he forced Will to try a little too hard. Bertie rarely made a mistake, and that secured the victory for him.

Two prodigies from Radley battled it out for the second semi-final… Benedict Yorston and Henry Henman. They had some epic restes in the first set, but Benedict’s experience and composure encouraged enough mistakes out of Henry to secure the set. Henry didn't give up though, and played much more patiently to win the second set. He refused to give Benedict any free points, and waited for his opportunities to hit the targets. Not only was momentum in Henry’s favour, but also fitness… Benedict picked up a niggle, and Henry pounced on the opportunity, taking the 3rd set convincingly.

James Medlow was serving well, returning well, and moving well, but he lacked Vaughan’s intensity. Vaughan’s force was a little bit harder, he was covering the court a little bit quicker, and his railroad was the best throughout the weekend. But the biggest difference was his unwavering self-belief and although James could match Vaughan shot for shot, Vaughan was playing like a champion and deserved the victory.

Once again, two great friends had to face one-another. Henry Henman and Bertie Vallat are both quality juniors and two to watch for the future.. They had some epic rallies and having watched both of them over the weekend, it would have been hard to pick between them. Unfortunately for Henry though, he had emptied the tank in his semi-final. He clearly had the heart to win, but didn’t have the legs. Bertie on the other hand looked fresh, and wasn’t going to give Henry any sympathy. For every quick point that Henry smashed in, Bertie would put Henry through two punishing restes and took the match in two sets.

Thank you to the T&RA as always for their sponsorship. Thank you to the competitors for coming all the way to west Dorset. It was great to see so many younger competitors, playing quality tennis, but also showing great sportsmanship, winning or losing. There was a great atmosphere in the club room and the Dedans, and everyone who played can be proud of their performance. 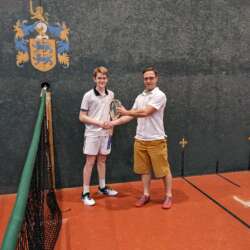 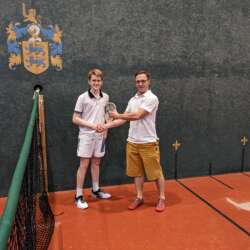 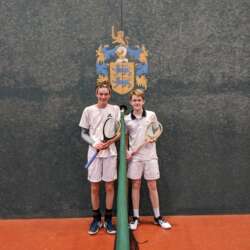 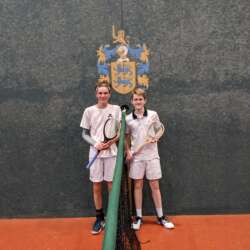 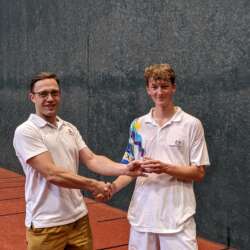 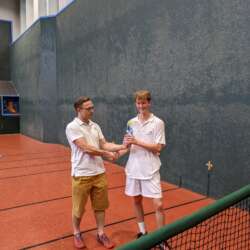 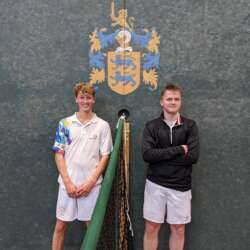