When the World Number One, Ben Cawston, takes on the World Champion, Tom Billings, something had to give. Both players had reached the final reasonably comfortably, although Alex Titchener-Barrett had provided a stern test to Ben in the semi-final, resulting in his only dropped game.

The match started edgily, with both players probing for any weakness in their opponent, which of course, wasn’t there. However, it was Ben who settled, perhaps buoyed by more match time in recent months as Tom had nursed his hamstring. In fact, Ben’s match play seemed to get better and better and the first two games were perhaps the best he had ever played. Ahead in both games, he made the advantage tell, closing down both to 7 and 9 points respectively, and establish a two-love lead.

Tom is rarely behind in recent years so this was a challenge. It was Tom who found more sublime touches early in the third game, and managed to establish a slender lead. But Ben was ever present and fighting hard, eventually drawing level and closing in on the game. Tom rallied but it just wasn’t enough as his old injury started to worry him and this was enough for Ben to win the vital third game, 15/12, and establish a three love lead. Not unassailable, but not far off. At this point Tom called an injury break but there just wasn’t enough time to make amends and Ben sailed through the fourth and final game to take the match in straight games and win his first ever British Open, to the delight of his travelling supporters in the gallery.

T&RA President, David Norman, praised both players before presenting the prizes and noted that in his 60 years in the sport, he had rarely witnessed such remarkable Rackets. The bar is set high and April’s Challenge between these two fine players looks to be one of the best in many years. David also thanked Brown Advisory, represented by Peter Mallinson, for their sponsorship and support, and commented that this allows Rackets to grow at all levels. Thanks also to marker, Ben Bomford, and referee, Paddy Sutton.

Both players were delighted to receive their Pol Roger champagne and T&RA branded racquets, along with salvers and match jackets from Brown Advisory.

World Champion Tom Billings, eased through his semi-final against Rory Giddins with relative ease, having a greater range of winning shots, coupled with his legendary recovery shots. Rory could never quite guarantee he had a winner and so was forced to play to the tightest margins. World Number 1, Ben Cawston, blazed out the blocks against Alex Titchener-Barrett to establish a comfortable 3-0 lead. However, ATB fought a hard fourth, eventually taking the game 17/14, and gain a foothold in the match. The fifth game was tense but eventually it was the speed and consistency of Ben which won the critical points, winning the match and setting up a tantalising final against the World Champion.

Alex Titchener-Barrett rolled back the years in a five game thriller against youngster Freddie Bristowe. The match swung one way and then the other and it wasn’t until a fifth and final, decisive game that ATB was able to book his place in the semi-final.

Rory Giddins also progressed through the quarter-final against Queen’s Club professional, Ben Bomford. It wasn’t all one-way traffic and the second game showed huge momentum changes before Ben was able to level the match, taking a commanding set to three. Thereafter, Rory tightened his game to see the match through.

Tom Billings mover excellently in his match against Jamie Giddins, which no sign of any hamstring concerns and his defence was amazing. Jamie found it hard to get points and Tom put away plenty of balls with some fine shots.

Ben Cawston hit better length shots than Nick James and also progressed into the semi-finals, although Nick fought doggedly throughout. Oddest moment in the first game at 10-8, when Nick’s return of serve managed to embed itself in his frame. 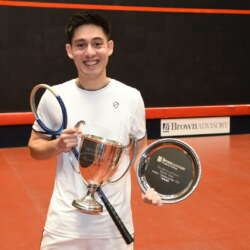 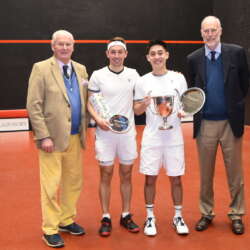 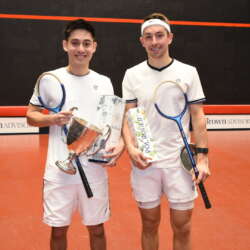 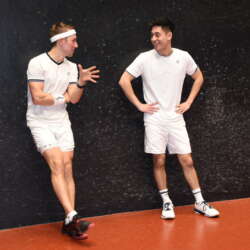 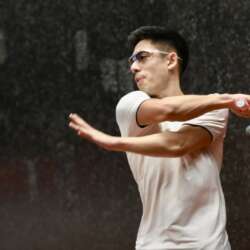 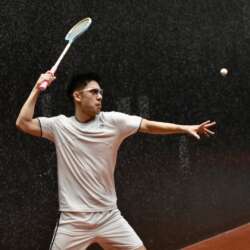 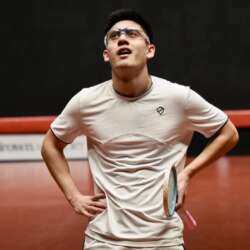 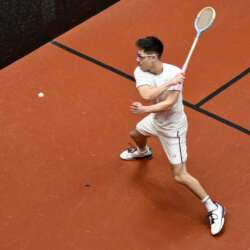 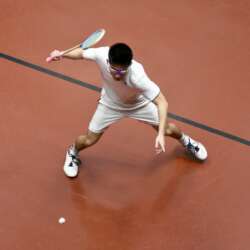 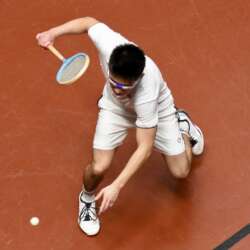 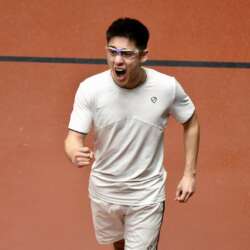