The Champions, Jonathan Larken and James Stout, started strongly with Stout picking up the first two points. Tom Billings served a fault but partner Richard Owen gave the Challengers a slight 3-2 lead. But the Champions were back in the lead through Larken's precision service, 5-3, before the Billings serve levelled the game at 5-5. The champions then capitalised on their next time in the box, stretching out a 9-5 lead. With the momentum now with the Champions, the Billing/Owen partnership could only muster a point to trail 6-9. A superb return negated the Stout serve and then it was Larken in impervious form serving through, with six unmatched pointed to take the first game 15/6. Game on!

The second game started cagily with the Challengers quickly gaining the box but only managing a solitary point in their first pair of hands, to lead 1-0. Larken responded in his next hand, with Stout making some remarkable shots, to take a 5-1 lead. Billings and Owen responded, with superb positing by Owen and supreme recovery shots by Billings, closing the gap to 4-5. As the game started to open up, some free flowing Rackets saw Larken and Stout extend their lead to 7-4. But now Billings and Owen found their length and started to turn the tables, taking a 10-7 in the next pair of hands. These points could all count in the longer term as once again the Champions closed the deficit to 9-10. With five points needed, a single point on the Billings serve gave the Champions hope. But then Owen serves and edges ever closer to winning the necessary game - point by point - and then it was championship point. Superb length from Owen and Stout was unable to return - 15/9 - and new World Champions.

The World Champions elected to serve and Larken made full use of the advantage, building a quick 6-0 lead. The Challengers were unable to capitalise when they stepped into the box, with only a single point on the Billings serve, 1-6. the game settled down but it was Larken's serve which continued to slowly build up the points, into a 9-1 lead. The Billings serve needed to work and it did, narrowing the deficit to 7-9 on the next hand. Ably supported by partner, Owen, the Challengers drew level and then established a small 11-9 lead. Fabulous rallies, with Stout reminding the packed gallery the special talent he is - but now the Champions were unable to regain a foothold as they fell further behind 9-12. One last opportunity to claw back some points came and went, before Billings served out in his next hand, taking the first game 15/9, 14 points without reply. This was certainly the start the Challengers needed.

The second game started cagily, with Billings serving a small 2-0 lead, but this was quickly overhauled for the Champions to lead 3-2. Points were difficult to win, thanks to spellbinding recovery shots for all four players and the game reached 4-4. Larken remained rock steady, Stout agile, quick and spectacular, Billings lightning fast with astonishing pick up shots, and Owen with raw power and unerring accuracy; this was a great match. But now the Challenging made their play, scoring seven points on the next pair of hands to lead 11-4. The Champions tired to respond but could only muster a point to trail 5/11. A round of serves later, the score was 6-12. Billings into serve but a strong defence from Stout. Owen then served out the game, 15-6, to take a 2-0 lead in the First Leg.

The match was now well poised. Billings continued to serve well and established a 4-0 lead. The Champions reversed their order and once again it was Larken's strength which swept them into a 5-4 lead.. However, the Challengers were pushing hard to lead 9-5 on the next pair of serves. A couple of well placed Stout serves narrowed the lead to 7-9 before points became difficult to win. Billings edged his pair ahead to 12-7, but the Champions came back to 9-12, then 10-13. It was tight but once again the Challengers were able to see the game out, 15/10, and were now 3-0 up.

The fourth, and what was to be the final game, was a close run affair. After early exchanges it was the Champions ahead 1-0. Six points, mainly from the Owen serve, was matched by seven points, mainly from the Larken serve - 8-6 to Larken and Stout. Tight and tense rallies continued, but now the game swung towards Billings and Owen as they re-established a 12-8 lead. Larken in the box and the champions played some astonishing Rackets to take the game to 14-12. All four players played a remarkable point which saw Stout on the floor, before a couple of lets were called. A huge Owen return won back the hand at the third attempt. A single point on the Billings serve and then another on the Owen serve brought the game back to 14-14, and the Champions called a set to three. Owen continued, winning two more points before the Champions had their chance, They could only bring the set back to 1-2, before the Challengers served out to win 17/5, and a huge 4-0 lead to take to New York in a week's time. The overall score from the First Leg is 4 games to love and 62 points to 40. The Champions will need to repeat their performance of three years ago in order for the points to become relevant.

PlayBrave sponsor, John Prenn, announced the sad news of the passing of former World Champion Geoffrey Atkins and the gallery observed a minute's reflection on his lifetime achievements. John then thanked the T&RA for its rapid organisation of the event, The Queen's Club for providing the court in peak condition, marker Ben Bomford and referee Mike Bailey for their careful stewardship of the first leg, and then presented bottles of Vintage Pol Roger to the four players on court.

The Second Leg will be in New York on Saturday 13th November.

Battle of the Brits

The first leg saw the Billing/Owen combination take a commanding 4-0 lead. The Billings serve and resilience, together with the Owen precision and power, were the deciding factor on Tuesday evening. Bailey and James fought hard and played some excellent Rackets but were ultimately chasing the game. The first two games were the tightest, as Bailey and James fought their way back into contention. However, it was the strength of Billing and Owen which saw them through.

The reward for the winning pair is the right to challenge for the World Doubles Crown against reigning world champions, Jonathan Larken and James Stout in November. The stakes couldn’t be higher and excitement is heightened by the US lifting the travel ban on UK citizens entering the US, removing one of the main hurdles. 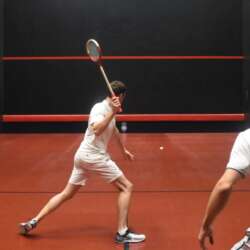 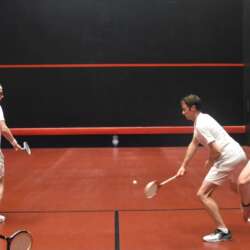 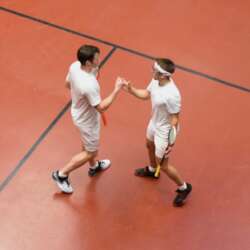 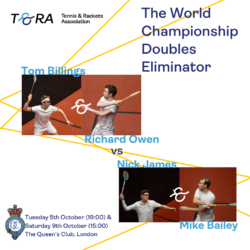 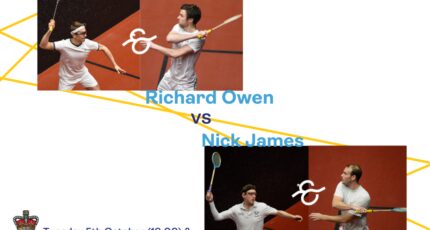