The singles tournament started with the withdrawal of the number 1 seed and favourite Jamie Douglas and as a result saw James Medlow move straight into the semi-finals as one of the tournaments youngest ever semi-finalists. There were other strong performances by young Seacourt players, as Max Trueman beat James Greenley in 3 sets and took a set off Ed Kay in the quarter finals. Rob Shenkman defeated Adam Dolman in three close sets whilst Jamie Giddins beat Ben Yorston to move into the semi final.

The first semi-final started very well for James Medlow as he took the first set against Jamie Giddins but Jamie soon found his form as he move through the gears to beat James 3-1. The second semi was a cracker was Rob Shenkman and Ed Kay split the first two sets and at 2-2 in the third it looked like the match would go all the way. Ed’s return of serve volleys and coolness under pressure eventually showed as he ended up victorious 3-1.

The Amateur final was to be played between Cambridge University and doubles partners Ed and Jamie. A close first set was followed by an epic second set that at 4-4 saw 12 deuces as both players sought the upper hand. This was amateur tennis at the highest level as Ed’s winning galleries cancelled out Jamie’s dedans. Ed took the game and the set and never looked back, winning the match 3-0 to take his second Amateur Championship to add to the one he won in 2018.

The Seaourt pair of James Mellow and Max Trueman put in an excellent performance in the First Round to defeat Richard Elmitt and James Greenley and demonstrate why they are a pair to watch in the future. Adam Dolman and James Acheson-Gray also moved well into the semi finals. The semi finals were disrupted by Storm Eunice and were postponed by two days to allow for travel. Giddins and Kay moved into the final with a 3-0 win whilst there was a brilliant second semi-final as Peter Wright and Jamie Douglas came from 2 sets to love down to defeat James Acheson-Gray and Adam Dolman.

And so the final of the Amateur Doubles was to be a repeat of the last 3 finals. A positive Covid test meant that the match was pushed back two weeks but the wait was well worth it. Ed Kay was on fire in the first two sets, returning with power and precision and retrieving everything from the serving end. Jamie and Ed moved into a 6/1 6/2 lead. But Jamie Douglas and Peter Wright have won this tournament too many times to give it away and a change of tactics saw them take the third set 6/3. The fourth set was a brilliant display of doubles, with hard hitting, retrieving and patience combining to take the set from 3-3 to 4-4 to 5-5 and to a deciding game. One final well played game from Ed Kay, and Giddins and Kay had retained their title for the third time.

We thank Chris Davies and the T&RA for hosting, tournament directors Jamie Giddins and Ben Ronaldson for organising and for all of the professionals for marking. It was great to see high quality amateur real tennis back at Queen’s.

Sponsored by The Tennis & Rackets Association 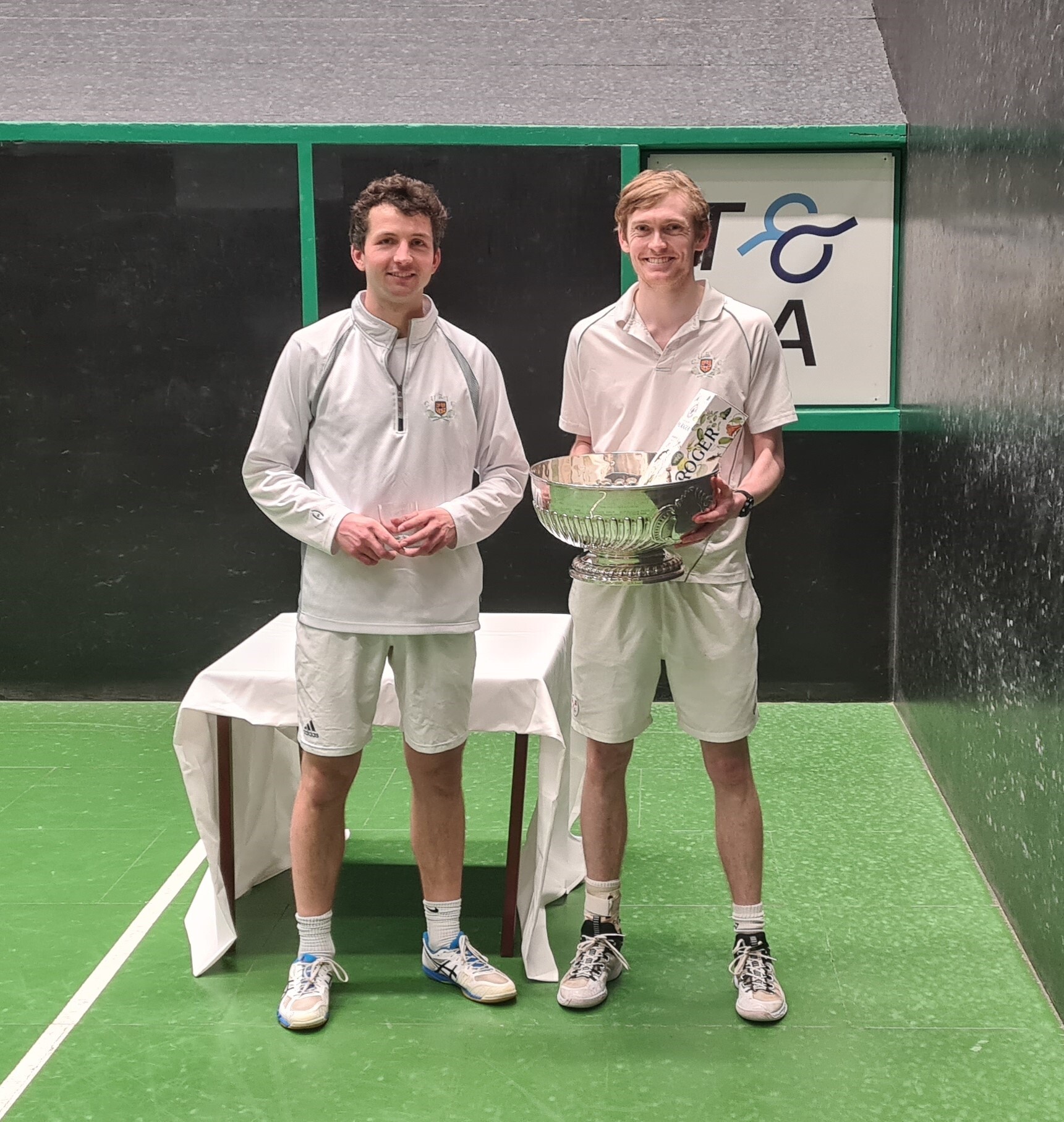