The keenly anticipated final between the top two seeds, Tom Billings and Ben Cawston, produced two individual games of the highest quality, the second and third games, sandwiched between the first game and the last two games which were totally dominated by World Champion and winner for the previous 4 British Opens, Tom Billings. Tom won 15/1, 10/15, 15/7, 15/2, 15/2. In extending his run of wins to 5 in a row, Tom has set a new record for consecutive victories, though Willie Boone and John Prenn, each with 6 wins in their careers, and James Male with a total of 7 wins, have set career totals for Tom to try to equal or surpass in years to come.

Tom began the match with his customary consistency and concentration, covering the court with amazing speed and keeping his opponent under constant pressure. Ben, on the other hand, seemed to be finding it hard to get into his stride and squandered opportunities with unforced errors. Though he got in hand 5 times in the first game, Ben only scored one point. This is just the start Tom must have been looking for. After being bedbound recently with Covid, he did not quite know how his legendary stamina might be affected, so a comfortable first game would have been a considerable confidence booster.

The second game produced by far the closest and best rackets of the match. Apart from a run of 5 points by Tom from 2-5 to 7-5, including 3 points on serve, both players were in and out of hand without scoring on many occasions, or scoring just one or two points, until a crucial run from 9-8 to 12-8 gave Ben the initiative. The retrieving by both players was astonishing and many of the rallies oscillated back and forth splendidly, to the delight of the packed Gallery. Ben took the game 15/10, and the stage seemed set for a drawn-out classic. After 10 hands for Ben and 9 hands for Tom in the third game, the score stood at a tantalising 10-7 to Tom. A real ding-dong battle it seemed. Then, quite suddenly, Tom had a run of 5 to take the third game and lead by 2 games to 1, and the match proved, it transpired, to be effectively over. Tom breezed through the last two games 15/2, 15/2 with Ben increasingly hampered in his movement by cramp in his leg, and having to resort to extravagant all-or-nothing attempts at outrageous winners whenever the ball happened to come his way. This 4 games to 1 win by Tom was a commanding overall display by the World Champion. The fact that Ben, in the entire match, was only able to score 3 points in a row on just one occasion is testament to Tom’s outstanding reliability on taking serve. His potential improvement over the next seasons should be to become even more efficient at putting away the chances that his magnificent return powers provide. The two greatest players during the last thirty or so years, first James Male and then James Stout, were head and shoulders above their respective contemporaries partly because they seldom missed an opportunity to make a winner when given the slightest chance to do so. As yet Tom is not as ruthlessly efficient as the two James’s at making clean kills on any loose balls. But with his exemplary commitment to practice and improvement he is progressively getting there! We are so lucky in British Rackets to have such a fine World Champion and such a splendid role-model for any aspiring Rackets player!

As expected, the No1 seed, World Champion and Amateur Champion Tom Billings, and the No.2 seed, Pro Champion and Open Invitation Champion Ben Cawston duly won their respective semi-finals to set up an intriguing clash for Sunday's final of the 2022 British Open Championship. Neither of these two players, who are clearly the top two singles players at Rackets since the retirement of former World Champion James Stout, had lost a game, or even dropped ten points in any game, in reaching the semi-finals.

Tom Billings, recovering from Covid, maintained that dominance in beating Alex Titchener-Barrett 15/9, 15/7, 15/5, 15/3. AT-B has won the Open three times in the past, and was Amateur Champion a record eight years in a row, but has not been concentrating on his rackets to the same degree in the last couple of seasons. So his convincing 3-1 win over Alex Duncliffe-Vines in the quarter finals was therefore a good performance and he showed just how formidable a server he can be, scoring 29 points on serves in the 3-1 win against AD-V. However Tom Billings is a different kettle of fish, and AT-B could only notch up 12 points on serve in the four games of the semi-final, compared to 25 by Tom. AT-B battled gamely throughout, but Tom's powers of return are of the very highest standard, and he won the majority of the many long rallies. Both players put more balls onto the back wall than they would like, but Tom was the more successful in making the eventual winner, or forcing the error from AT-B. In the last game, although Tom was understandably getting tired as a result of his recent Covid, his play didn't show it, and AT-B was running out of ideas on how to try to break down Tom's exemplary pressure and consistency. AT-B could only glean 3 points in the fourth game from 9 hands. The World Champion looks the part!

Ben Cawston also notched up a 4 games to O victory, beating Queen's Club's Head of Rackets Ben Bomford by 15/8, 15/13, 15/11, 15/0, but the first three games were closely contested, especially the second, where Bomford led 13-10. Bomford desperately needed this game to keep his chances alive, but Cawston got back in hand and caught up to 13 all, whereupon Bomford chose 'no set', rather than choosing one of the more popular options, 'set 3' or 'set 5'. When Cawston duly took the two more points he needed to win the game 15/13, some spectators questioned the wisdom of Bomford's choice of 'no set', but in the context of the game at that point, it was a valid decision, giving Bomford two chances to get the serve back and this would then require him only to win two more points for the game, not 3 more or 5 more. Perhaps if Bomford had won the game in 'no set', the same spectators would have thought it such an astute choice!

Cawston was always ahead in the third game, reaching 13-6 before Bomford closed the gap to 11-14 in three hands, but when Cawston got the serve back and took the game 15/11, the writing seemed on the wall for Bomford! At this stage, trying to come back to take the match by winning 4 straight games was a daunting prospect, and though Bomford got in hand 5 times in the fourth game, he could not win any points and Cawston ran out the winner 15/0 to take him into the final.

It is now three years since Bomford recorded his epic win over Cawston in the final of the Pro Championships by 3 games to 2. Since then the pendulum has moved dramatically in Cawston's favour in matches between the two Ben's. This has not been due to any marked decline in Bomford's performances, but more reflects the growing assurance in Cawston's play. He has grown in strength physically and is making progress tactically, but still shows poor concentration and makes far too many unforced, needless errors for someone of his exceptional talent. His lightning speed about the court, allied to wonderful anticipation, means it is only the most accurate shots by opponent's that are outside his reach. But if he is going to confirm his position as the next Challenger for Tom Billing's World Title, there is room for him to tighten up his game considerably, cut out so many profligate errors, put far fewer balls onto the back wall, and learn to maintain much greater consistency.

Sunday's final, again best of 7 games, is a mouth-watering prospect if both players produce their best!

Very close first game between ATB and ADV, with ATB leading 13-5, but ADV getting back to 13-13 in one hand and then winning in the set. After that ATB dominated from the service box and ADV didn't receive serve well enough to trouble ATB.

Ben Cawston was just too good for Freddie Bristowe. Some great rallies, but Ben was lightning fast and put the ball away impressively.

In last quarter-final Tom Billings had too much for Rory Giddins. 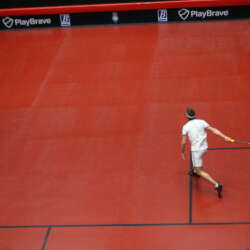 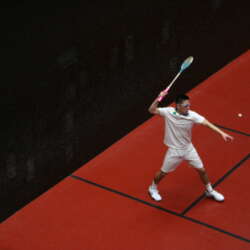 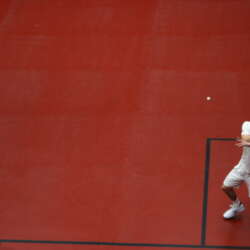 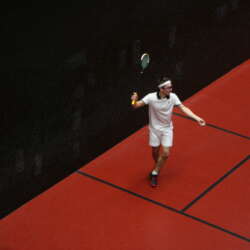 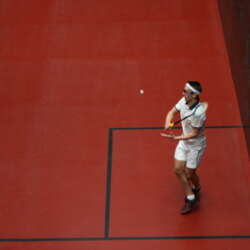 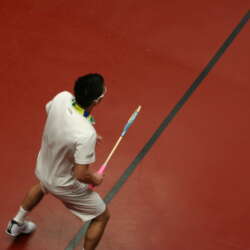 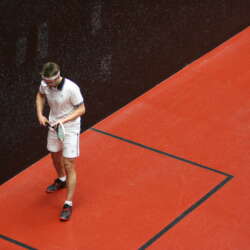 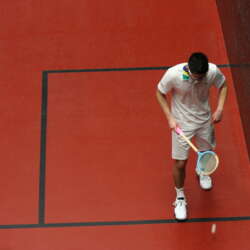 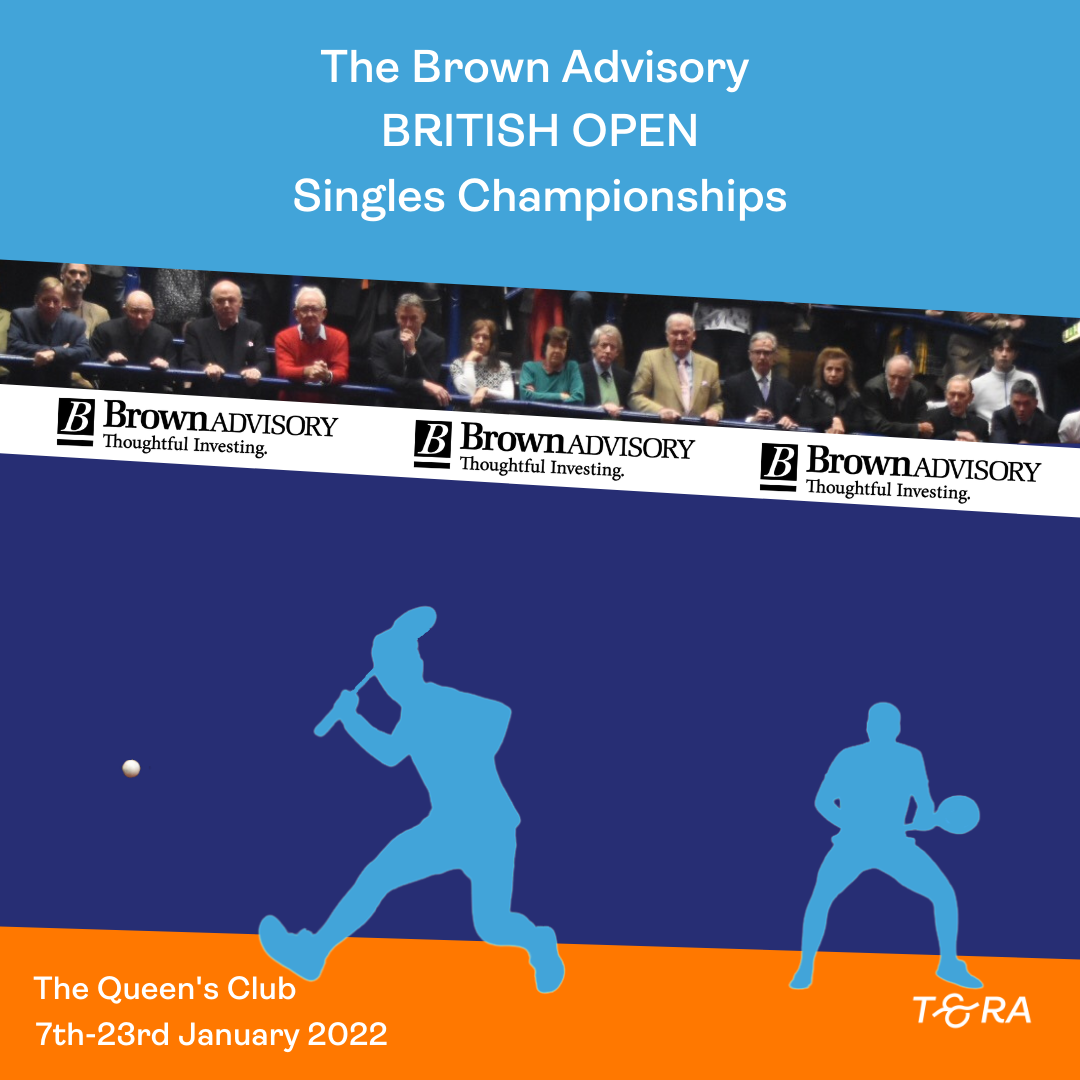