WRTC was proud to host a neutral venue for the Pol Roger Final against Queens and RTC. The day started well with the fire alarm which provided a nice warm up for the players as they had to evacuate the club out onto the Astro turf courts. False alarm and the first match up was the 2nd doubles- RTC pair Charlie Packham & James Hamblin stormed a 5-0 lead surprising Jonny Whitiker (C) & Richard Elmitt of Queens- Jonny and Richard had a quiet word with themselves and started their fight back and won the next 12 games to win the first rubber!

Next up 1st Singles-Mathieu Sarlangue(Q) took on Peter wright (R) – first set was tight, with exceptional rallies and brilliant tactics and match play from both ends with Mathieu securing the first set 6-2. A valiant effort from Peter but he was still struggling with the effects a recent covid infection and just didn’t have the lungs to continue- 2-0 to Queens. The second singles was definitely the match of the day with Phil Dunn ( Captain and RTC) taking on Rory Giddins (Q). Just a brilliant match with everything left on the court. Rory took the first set 6-4 only to lose the second 0-6- Final set was destined to go 5-5 and the players didn’t disappoint! 5-5 and a team win for Queens or an important win for RTC to stay in the match! Rory had the tactical edge with the service end and served out the match to win the Pol Roger final for Queens!! The match continued with the 3rd singles where Henry Mullen (Q) took on James Watson (R)- 6-5 James and the game was contesting hotly for match of the day until the unthinkable happened! James went into the forehand corner of the service end and snapped his achilles!! James was rushed off to Frimley Park Hospital – we have heard he is doing ok considering the injury and we will update you when more news is available.

A huge thank you to James Simpson of Pol Roger for providing lunch with a beautiful selection of wines and of course Pol and to the T&RA and the stewards to ensuring this year’s competition was superbly run and lastly to Simon Roundell who presented the prizes with his T&RA hat on!

In accordance with Rule 14 (There shall be a play-off between the first-round losers in order to determine which two Clubs should be relegated in the following season. The play-off matches shall take place on the same date as the Pol Roger semi-finals and shall be played between the losers of the first and third matches in the main draw and the losers of the fourth and second matches.)

I have therefore drawn for the home teams; Moreton and Seacourt have that advantage.

The key match was the second doubles involving the new Chairman (stepping in as a late Covid sub). They lost the first set 2/6 but recovered to win the second from 4-5 down and lead 5-2 in the third. Which they then lost 5/6!

Please find the result from yesterday’s Pol Roger match between MCC and Seacourt. MCC won 4-1 in a very competitive tie. Highlight of the day was watching Seacourt’s second singles player – Max – a star of our game if he keep progressing in the same fashion! 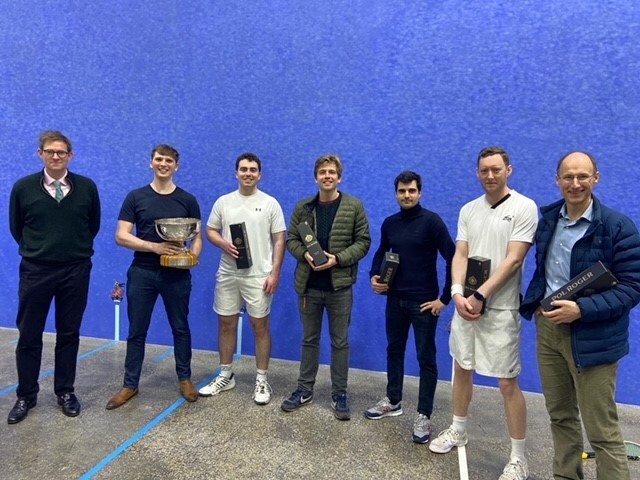