The Under 18’s was at Queens, Under 16’s at Radley and the Under 13’s was held at The Oratory- so it was a busy weekend of Tennis.

The top four pairs reached the semi-finals without any great diificulty, apart from Canford who just squeezed past Radley 4 (Harry Markham & Monty Donald) 8/6.

Canford were well beaten by Radley in the semi-final, while Wellington just held on to deny MCS 6/5.

Henry Henman, possibly the best individual on show, almost managed to drag MCS back from 1/4 down, with a manful supporting role from an inexperienced Lythgoe.

In the final, Wellington’s unorthodox partnership – the ultra-explosive Willem Sweet complemented by the ultra-consistent retriever Benji Barnes – came very close to beating the favourites. Radley led 4/2 only to be pegged back to 5/5 and to lead 6/5 and 7/6. Radley, however, kept cool heads in the final two games to win by a nose.

Magnus Garson’s stylish floor play was complemented effectively by Ed Alder’s sometimes spectacular volleying. It was not a final for the faint-hearted spectator but a full dedans was richly entertained throughout.

This event was probably the most evenly contested of all the events on this day. Numbers suffered through hockey injuries and Covid strikes in the week before (striking Radley, Canford and Seaford). Throughout, lots of good shots were played, many good shots retrieved with consistency the main element which separated them for the A grade standard.

Nevertheless, of the five pairs remaining all but one remained in with a chance of the final before the last two group matches. Not a single love-set was registered, and only the sadly depleted Canford pair failed to win a set, though competing strongly throughout).

The final was no anti-climax, either. Toby Marriott proved to be decisive at 5/5 as he produced some thoughtful and varied serves to finish the game to 15.

Eight pairs entered this tournament, representing four different schools. In group A, favourites Radley 1 (Hugo Acheson-Gray and Ambrose Garson) cruised through to the semi-finals undefeated, conceding just five games in their three sets. Three of the five games conceded were to the young Radley 3 pair (Theo Henman and Mikolaj Rutka) who lost by the same margin (3-6) to Canford 2 (Sam Reeve and Arthur Toosey). Finishing fourth in the group were the plucky girls of Wellington 2 (Lila Hue-Williams and Olivia Holroyd) who fought hard to take a couple of games off each of the Radley pairs.

Group B positions were not confirmed until the last match, which was a close contest between a determined Canford 1 (Will Fountain and Albert Blackburn) and a steadily improving Radley 2 (Rory Acheson-Gray and Woody Walker); a 6-4 victory to the Radley boys ensured that each of the semi-finals would be contested by two schools (albeit the same two in each case). Wellington 1 threatened to contend for qualification but were unable to sustain their bid, as first Radley 1 pulled away to a 6-2 victory and then the Oratory duo (Joe Bradley and Ethan Milton) did the same.

The first semi-final, between Radley 1 and Canford 1 was the match of the day. In a tense encounter, involving (from both pairs) nervous serving, as many tentative ground strokes as there were controlled ones, fabulous volleying, astonishing reflex returns, and more than a few lucky net cords and racket frames, Canford reached match point at 5-3. Radley then fought back to 5-5, and at 40-all, Rory A-G served an ace that landed in the nick and took the home pair to the final. The second semi, though equally entertaining in its way, was less nervy, as Radley 2 quickly established their dominance and took the set 6-1.

Wellington withdrew from their 7th/8th play-off, but the 5th/6th challenge was a fascinating battle between the 3rd placed teams from the two groups. For a while it could have gone either way, but the Oratory boys produced a more consistent performance as they eased from 3-2 to their 6-2 victory. It was good to see all four boys trying to play orthodox, thoughtful tennis, rather than crashing the ball around the court, and it was an enjoyable spectacle for the onlookers.

The all-Radley final could have been something of an anti-climax, but, to everyone’s credit, there was a fine display of positive and skilful tennis, with both pairs proving accomplished in attacking shots and in defence. Ultimately, Radley 1 prevailed (6-2) mainly by virtue of showing greater control and variety in their serving, which kept their opponents down at the hazard end for longer than they might have wished – but it was a closer match than the score would suggest.

The U13 draw was booming in numbers, despite a few withdrawals due to COVID & injuries, we ended up with 11 pairs. 4 from Oratory, 2 Oratory Prep School with Ludgrove, Westbourne House, Eagle House and Summerfields all fielding a team. The format, 3 box groups into the play offs.

In the first group Summerfields the early favourite. Lazlo Garson & Harrey Bewes comfortably in control of the group, losing just 3 games in 3 sets. A tight tustle between Oratory2 (Steve Zhu & Henry Connolly) and Oratory Prep2 (Albie Tomlinson & Joe Barrett) went narrowly to Oratory2 by a game, which gave them 2nd place in the group. Oratory1 (Mateo Espinosa & Luc Moorhouse) very much the newbie pair in the group, came last but played progressively better throughout the day.

2nd box group had two heavy weights, Eagle House (Algie Nottingham & Aubrey Cheong) & Ludgrove (Oscar Novis & W Woodcock) matched with 2 Oratory teams. Oratory3 (Harriet Wray & Sophia Byatt-Blumenthal) & Oratory2 found themselves a little out of depth but enjoyed the battle of harder, longer rallies than perhaps used to. It was clear that Ludgrove & Eagle House would end up top. Their match was very evenly matched, with never more than a game between them. Some unbelievable “gets” out the forehand corner partnered with some superb finishing shots, saw Ludgrove inch ahead, working seamlessly as a pair but it was Eagle House that found their length of serve and dominated the service end in the last minutes of the match to take it by a game 5/4.

3rd box group was wide open. Wonderful to see first ever schools entry from Streatley Primary school (Patrick and Joseph Dineen), both playing 4 years up and enjoying every match despite being slightly out of depth. All matches were incredibly close between Oratory 4 ( Nico Vallebona & Jonah Ramus), Oratory Prep 1 (Ceclia & Jacobo & Westbourne House (Fergus O’Connell & Archie Brown). As the matches went on, more and more thought was being placed into service choices & shot selection. It was great to see all competitors working hard to figure out the right tactics for their opposing teams. All beating each other once, it went down on game count back. Westbourne House through to the semi-final on game count back. A terrific competitive box group, with a re-match between Oratory 4 & Oratory Prep 1, for 5th & 6th, Oratory Prep taking 5th place by a game.

Onto the semi-finals. Ludgrove to play Summerfields. It was clear to see some nerves in those first few games, with unforced errors on both sides. Sensational rallies, quite possibly the match of the tournament, with a full dedan to appreciate the quality of tennis coming from all four U13s on court. Summerfields always a game ahead, but some crucial retrieving skills from Ludgrove on a tense 4 all game, after a long deuce went Ludgrove’s way. Summerfields perhaps rueing some missed chances and 2 loose serving errors gave Ludgrove the match 6/4.

The other semi-final, Westbourne House v. Eagle House. After 2 very long opening games, the crowd were bedding in for a long match ahead. It wasn’t to be. One chase in the 3rd game put Westbourne House down the receivers end and they never left. Aubrey found his length on serve with Algie returning everything (and more) that was thrown at him. Flying across court, if not to return the ball with interest, then to make sure not to give up a chase. An effective tactic which won the match 6/1.

The final was a tense one between Ludgrove & Eagle House. Eagle House once again dominated the servers end. Ludgrove couldn’t find a way past Algie and couldn’t find a gallery either (though not through lack of trying!). Eagle House extended a strong lead, before Ludgrove took a game back at 2/5. Some clever tactical play earnt them that game & we thought a comeback might be on the cards, but it wasn’t to be. Algie served superbly well and closed down any thoughout of a comeback and with that, Eagle House won the title 6/2.

Well done Eagle House & to all competitors who competed with wonderful sportsmanship throughout. 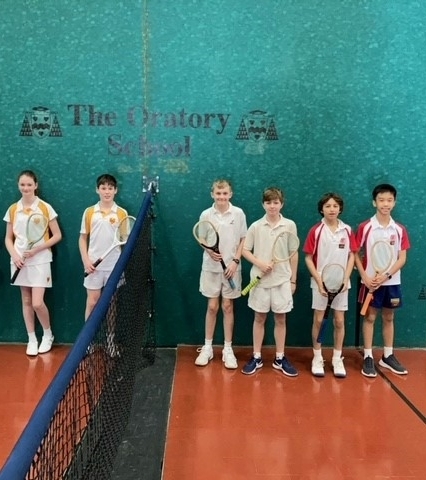 Results Seniors at Queens Results U16 at Radley Results U13 at Oratory
Share this page:
All News